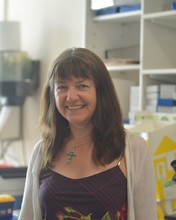 Angela Roberts is Professor of Behavioural Neuroscience at the University of Cambridge, UK. She received her degree in Neurobiology from the University of Sussex and her PhD in neuroendocrine control of reproduction from the University of Cambridge under the supervision of Joe Herbert in the Department of Anatomy. She stayed on in Cambridge and did her postdoctoral training in the Department of Experimental Psychology with Trevor Robbins where she held a Royal Society Research Fellowship from 1992-96. She then took up a teaching appointment in the Department of Anatomy and there began her studies on the prefrontal control of emotion regulation in primates. Currently she undertakes the scientific leadership of the marmoset research centre at Cambridge and is Chair of the steering committee for a new Laboratory of Translational Neuroimaging. She also sits on the Executive committee of Cambridge Neuroscience.

Her research focuses on the neural circuits underlying the regulation of positive and negative emotion, of relevance to the understanding of the aetiology and treatment of a range of neuropsychiatric disorders. Early on in her career she was instrumental in revealing the localisation of specific forms of behavioural flexibility within distinct regions of the prefrontal cortex and their differential modulation by dopamine and serotonin. Her recent investigations into the regulation of negative and positive emotional states have built on these early findings and provided an important framework for the stratification of anxiety.

She is an associate editor for Frontiers in Behavioral Neuroscience, a field Editor for the International Journal of Neuropsychopharmacology and sits on the council of the British Association of Psychopharmacology and the UK Council for Understanding Animals In Research. She has been elected to the Fellowship of the Academy of Medical Sciences, Great Britain. She has given many keynote lectures including  the European Brain and Behaviour Prize lecture at FENS and the Andrew Schally Lecture in Montreal. Her work has been honoured by the Goldman-Rakic Prize for Outstanding Achievements in Cognitive Neuroscience awarded by the Brain and Behaviour Research Foundation.