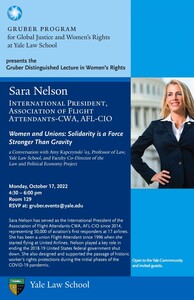 Sara Nelson delivered the Gruber Distinguished Lecture in Women’s Rights entitled, “Women and Unions: Solidarity is a Force Stronger Than Gravity” on Monday, October 17, at 4:30 PM EDT.  She was in conversation with Amy Kapczynski, Professor of Law and Faculty Co-Director of the Law and Political Economy Project. The Lecture took place in person (attendance limited to those with Yale IDs, as well as invited guests) in SLB 129, and was streamed live for all others.

Ms. Sara Nelson has served as the International President of the Association of Flight Attendants-CWA, AFL-CIO since 2014, and is currently serving her second four-year term. She first became a union member in 1996 when she was hired as a Flight Attendant at United Airlines and today, she represents 50,000 of aviation’s first responders at 20 airlines. The New York Times called her “America’s most powerful flight attendant” for her role in helping to end the 35-day Government Shutdown. Nelson led AFA’s efforts to achieve eighteen legislative victories in the FAA Reauthorization Act of 2018, including achieving a two-hour increase in minimum legal rest for Flight Attendants and other efforts to combat fatigue on the job. Before that, she led the 90-day campaign to reverse national security policy in order to keep knives and other weapons off planes. She also crafted the campaign for “100,00 Eyes in the Skies,” which successfully resulted in mandatory training for Flight Attendants to recognize and report human trafficking.

Information on the Gruber Distinguished Lectures in Justice and Women’s Rights is available here.