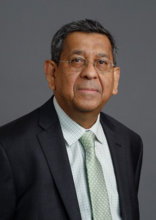 Aravinda Chakravarti, Ph.D. is Director, Center for Human Genetics and Genomics, Professor of Medicine, and Professor of Neuroscience & Physiology at the New York University School of Medicine. He was the 2008 President of the American Society of Human Genetics, and has been elected to the US National Academy of Science, the US National Academy of Medicine, the Indian National Academy of Sciences and the Indian Academy of Sciences. His research has led to many roles as a key participant and architect of the Human Genome project (and HapMap and 1000 Genomes projects) and his work is currently aimed at the genome-scale and computational analysis of the molecular basis of human disease. For his contributions to human genetics and genomics he was awarded the William Allan Award in 2013 by the American Society of Human Genetics.

Aravinda received his doctoral degree in human genetics in 1979 and started his faculty career at the University of Pittsburgh (1980 – 1993), was the James H. Jewell Professor of Genetics at Case Western Reserve University (1994-2000), and the inaugural Director and Henry J. Knott Professor of the McKusick-Nathans Institute of Genetic Medicine at Johns Hopkins (2000-2007), and the inaugural Director of the Center for Complex Disease Genomics at Johns Hopkins (2007-2018). He is one of the founding Editors-in-Chief of Genome Research and Annual Reviews of Genomics & Human Genetics, and serves on the boards of numerous private Institutes and charities, international journals, academic societies, the NIH and biotechnology companies.