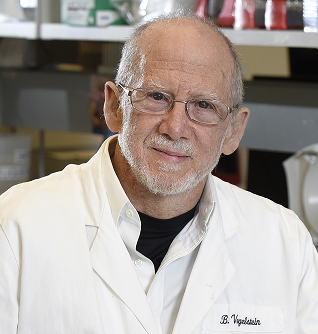 Bert Vogelstein, MD, of the Kimmel Cancer at the Johns Hopkins University School of Medicine, has been at the forefront of cancer research for decades. His group has laid vital pieces of the framework for the field of cancer genetics starting in the 1980s with their discovery that colorectal tumors are clonal, that is, derived from a single cell.  They subsequently found that genetic alterations in oncogenes and tumor suppressor genes drive colorectal tumorigenesis and that these alterations are often accumulated in a stereotyped, stepwise fashion. Together, these massive conceptual advances underlie our current understanding of how all common cancer types develop.

In the course of this work, Vogelstein’s group has identified mutations in many of the most important cancer driver genes.  Among them are TP53, which is now known to be the most commonly mutated tumor suppressor gene in human cancers, and PIK3CA, the most commonly mutated oncogene in human cancers.  Some of their discoveries, such as genetic alterations in PIK3CA and IDH1 and IDH2 have led to the successful development of drugs that target the mutated gene’s protein products.   Vogelstein’s group co-discovered the genetic alterations responsible for mismatch repair defects in tumors.   Two decades later, they discovered a treatment for these tumors, applicable to 4% of all advanced cancers.    Thus, his findings have not only greatly increased our understanding of how cancer develops but also provided therapeutic targets and FDA-approved drugs that exploit these targets.

Along the way to these and other discoveries, Vogelstein’s team didn’t limit themselves to the techniques available at the time—they created their own, some of which have gone on to be used by innumerable researchers in labs studying a broad range of topics. For instance, his group’s paper about their method for radioactively labeling DNA has now garnered over 20,000 citations. As another example, he and his long-time colleague Kenneth W. Kinzler invented a technique called digital polymerase chain reaction (PCR) for finding rare mutations in DNA samples.  Digital PCR turned out not only to be useful for this purpose, but also for quantifying the results of next-generation sequencing of DNA, one of the most important techniques in modern biological research.