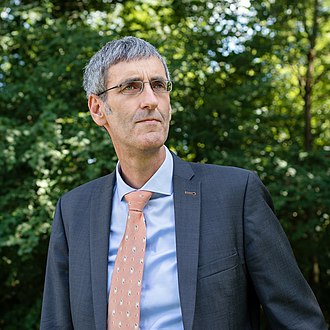 Most astronomical instruments arise out of a human desire to know what’s out there in the universe. Frank Eisenhauer’s instruments are different: He designs them to observe what’s coming.

The approach is one he inherited from his mentor, Reinhard Genzel. The two have worked together at the Max Planck Institute for Extraterrestrial Physics since 1995, when Genzel oversaw Eisenhauer’s diploma’s thesis.

In their collaboration, Eisenhauer says, Genzel provides “a lot of the astronomical vision,” while he himself serves as the “experimental physicist”— “the one who designs the experiment and then executes it.”  The citation for the 2022 Gruber Prize in Cosmology honors the “unprecedented and exquisite” precision of the instrumentation Eisenhauer designed effort to probe the supermassive, invisible object (Sagittarius A*, or Sgr A*) at the center of our galaxy. The results of those observations have convinced the astronomical community that Sgr A* is in fact a black hole. (Genzel shared the 2020 Nobel Prize in Physics with Andrea Ghez and Roger Penrose for his contributions to work on SgrA*.)

Those observations of Sgr A* were possible only because of a previous generation of Eisenhauer instrumentation that represented, in the words of one Gruber nominator, “a giant leap in the capabilities of imaging spectroscopy”—the measurements of how matter affects the absorption and emission of light. In 2003 the instrument, part of the Spectrograph for INtegral Field Observations in the Near Infrared (SINFONI) project at the European Southern Observatory’s Very Large Telescope on Mount Paranal in Chile, began observing stars operating under the great gravitational influence of Sgr A* as they execute their exceedingly rapid, highly eccentric orbits.

Two years later the group of German and French researchers around Eisenhauer—Genzel, Stefan Gillessen, Pierre Lena, Guy Perrin, and Thibaut Paumard—began discussing an opportunity to observe an upcoming event involving one of those stars, S2. Having measured a precise orbit of S2 after the first peri-passage in 2002, they could now calculate that in 2018 the star would again reach the part of its orbit where it would pass closest to Sgr A*,  a distance of only 17 light-hours. Combining the observing power of all four 8-meter telescopes at Paranal (through a process called interferometry) meant that the experiment could achieve the necessary thousandfold improvement in sensitivity over earlier interferometers necessary to resolve the resulting relativistic effects. “You know what’s coming,” Eisenhauer says, “you build an instrument for it, and then you try to be ready in time.”

The instruments were ready in time—just barely—but Eisenhauer’s designs also came with extra benefits: They ended up revolutionizing several kinds of instrumentation, including imaging detectors, laser metrology, and dual-beam operations. GRAVITY, as the collaboration called their experiment, went live in 2016 and in 2018 achieved their primary goals:

• Observations of gas orbiting close to the “last stable orbit”—the point before which it succumbs to the gravitational tug of Sgr A* and disappears from sight forever.

Together this data provided enough evidence to satisfy the astronomical community that Sgr A* is indeed a black hole.

GRAVITY’s other contributions include:

• A determination of the distance between the Sun and the galactic center at a level of precision ten times greater than previous measurements (a calibration that other astronomers will use as a reliable first step in tracing the evolution of the universe on the largest scales).

• A test of Einstein’s general relativity using supermassive black holes at the highest level of precision to date. (Einstein, as usual, passed.)

The scientific impact of Eisenhauer’s technical innovations don’t stop there. Other astrophysicists have already begun using SINFONI and GRAVITY instrumentation to study distant star-forming galaxies, black holes at the centers of nearby galaxies, and planets orbiting stars within our own galaxy.

The 2022 Gruber Prize in Cosmology primarily honors Eisenhauer’s work on GRAVITY but it also recognizes the whole of his contribution to astrophysics.