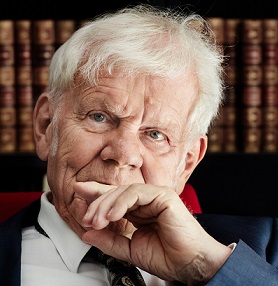 Friedrich Bonhoeffer, PhD, emeritus director of the Max Planck Institute for Developmental Biology in Tübingen, Germany, made pioneering contributions to understanding the molecular mechanisms behind axon guidance. In the 1970s and 1980s, he developed a series of innovative in vitro assays that enabled scientists to isolate the molecular cues that guide axons to their precise target in the target region. Using these assays, he made the surprising and transformative discovery that guidance is driven by repellent as well as attractive cues. He then went on to identify several of those signals. Among his seminal discoveries was the finding that the growth of one group of axons (temporal) in the chick retina is guided by the repellent cues of the anterior membranes of the tectum (the main visual center in the brain of chicks), which provided evidence that axons are guided to their targets by repulsive as well as attractive cues. This work led to the identification by Bonhoeffer and by others of the Ephrin guidance molecules, one of several major evolutionarily conserved guidance cue families.  He went on to identify additional guidance mechanisms both through biochemical purification and by establishing the zebrafish as a model system for genetic analysis of guidance mechanisms.