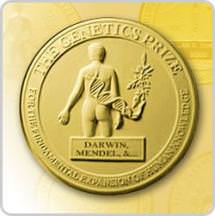 The original medal for the Gruber Genetics Prize - now a bronze paperweight that accompanies the gold laureate pin - presented a couple of challenges. First was the matter of scale: How do you graphically depict something that is virtually formless and microscopic? Second was the question of relevance. That is, with the sequencing of DNA molecules for the human body reaching a critical point, a human form – preferably accompanied by the characteristic DNA double helix – seemed like a logical solution. But how do you give shape and meaning to a generic human image and something resembling a piece of latticework? In the end, it was historical perspective that helped in identifying a workable concept. The most creative original genetics research had been done by Gregor Mendel in a monastery in a corner of what is now the Czech Republic. He followed the traits of the common garden pea through hundreds of generations to demonstrate genetic connections. This was the inspiration for the exceedingly long pea plants in the image on the medal. In shaping this human form, we used a gender-neutral image to suggest that the continuing discoveries spawned by genetics research are due to the efforts, insights, and dedication of both male and female scientists. It was Dr. Larry Tise, early consultant to the Foundation and President of the International Congress of Distinguished Awards, who conceived this design and worked with the designer to produce the prize medal.