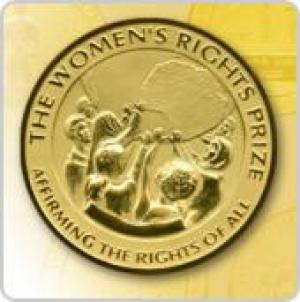 A Women’s Rights Prize was an exciting addition to the International Prize Program, and the Gruber staff – made up primarily of women – went to work to devise an appropriate medal symbol. What would best symbolize the universal role of women? The idea we arrived at: Women help hold up the world! The staff set about imagining how that would look, envisioning women from around the world supporting a globe. To emphasize the diversity befitting an international image of women, Foundation staff cut out pictures of women wearing the hijab, women of African descent, Asian women, and others from around the globe and sent them to the artist. These images of diversity were incorporated into the design and, once the globe was given a more three-dimensional appearance, the result was just right.