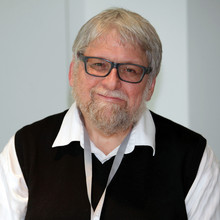 Jim Lupski is Cullen Professor of Molecular and Human Genetics and Professor of Pediatrics.  Dr. Lupski received his initial scientific training at the Cold Spring Harbor Laboratory as an Undergraduate Research Participant (URP) and at New York University receiving his undergraduate degree in chemistry and biology (1979) and completing the M.D./Ph.D. program in 1985.  In 1986 he moved to Houston, Texas for clinical training in pediatrics (1986-1989) and medical genetics (1989-1992) and then established his own laboratory at Baylor College of Medicine where he remains, and as of 1995, as the Cullen Professor.  Through studies of Charcot-Marie-Tooth peripheral neuropathy, a common autosomal dominant trait due to a submicroscopic 1.5 Mb duplication, and Smith-Magenis syndrome, a contiguous gene deletion syndrome, his laboratory has delineated the concept of ‘genomic disorders’ and established the critical role of copy number variants (CNV) and gene dosage in conveying human disease phenotypes.  An increasing number of human diseases are recognized to result from recurrent DNA rearrangements (recent examples include obesity and both autism and schizophrenia) involving unstable genomic regions and have thus been classified as genomic disorders.  The conceptualization and mechanistic understanding of genomic disorders has been among the lab’s most significant contributions; including the elucidation of Non-Allelic Homologous Recombination (NAHR) and the replication based mechanisms of Fork Stalling Template Switching (FoSTeS) and Microhomology Mediated Break Induced Replication (MMBIR).  Dr. Lupski’s laboratory has also used chromosome engineering to develop mouse models for genomic disorders and provide model organism evidence for mirror traits.  Recently, the laboratory’s CMT studies in collaborations with Richard Gibbs and the Baylor Human Genome Sequencing Center resulted in the first personal genome sequence to identify a “disease gene” by whole genome sequencing (WGS) and demonstrated the utility of WGS for optimizing patient management.  These latter investigations further elucidated the potential role of rare variants in complex traits such as carpal tunnel syndrome and fibromyalgia. Jim is an elected member of the American Association for the Advancement of Science (1996), the America Society of Clinical Investigation (1998), the Institute of Medicine of the National Academies of Science (2002), and the American Academy of Arts and Sciences (2013)   For his work in human genomics and the elucidation of genomic disorders Dr. Lupski was awarded a Doctor of Science degree honoris causa in 2011 from the Watson School of Biological Science at the Cold Spring Harbor Laboratory.  He has coauthored over 700 scientific publications, is a co-inventor on more than 20 patents regarding molecular diagnostics and has delivered over 580 invited lectures in 37 countries.