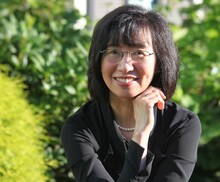 Jeannie T. Lee is a Professor of Genetics (and Pathology) at Harvard Medical School, the Blavatnik Institute, and is Vice Chair of the Department of Molecular Biology at the Massachusetts General Hospital. Dr. Lee specializes in the study of epigenetic regulation by long noncoding RNAs and uses X-chromosome inactivation as a model system. She is a Member of the National Academy of Sciences, a Harrington Rare Disease Scholar of the Harrington Discovery Institute, a recipient of the Lurie Prize from the Foundation for the National Institutes of Health, an awardee of the Centennial Prize from the Genetics Society of America, the Molecular Biology Prize from the National Academy of Sciences, U.S.A, and a Fellow of the American Association for the Advancement of Science. Dr. Lee was also named a Distinguished Graduate of the University of Pennsylvania School of Medicine and an Investigator of the Howard Hughes Medical Institute. From 2013-2018, she co-launched the Epigenetics Initiative at Harvard Medical School and served as its Co-Director. Serving on the Board of Directors of the Genetics Society of America (GSA), Dr. Lee spearheaded the TAGC (The All-Genetics) Conference in 2016. As GSA’s President, Dr. Lee established a Strategic Plan and a Development strategy for the society in 2018. She received her A.B. in Biochemistry and Molecular Biology from Harvard University and obtained M.D.-Ph.D degrees from the University of Pennsylvania School of Medicine. Dr. Lee then carried out postdoctoral work at the Whitehead Institute & MIT and became Chief Resident of Clinical Pathology at the Massachusetts General Hospital prior to joining the Faculty at Harvard Medical School. As a new investigator, she received the Basil O’Connor Scholar Award from the March of Dimes and the Pew Scholars Award. Growing knowledge of X-inactivation mechanisms and RNA biology is currently being translated to treat X-linked neurodevelopmental disorders such as Rett, Fragile X, and CDKL5 Syndromes.  ​