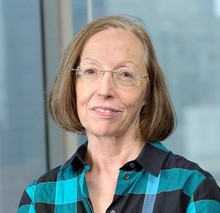 Kathryn V. Anderson is Chair of the Developmental Biology Program at Sloan Kettering Institute in New York City. She studies genetic pathways that direct embryonic patterning and morphogenesis in the mouse embryo.  She holds a PhD from University of California, Los Angeles and did her postdoctoral training in developmental genetics at Max Planck Institute in Germany. Dr. Anderson is a fellow of the American Association for the Advancement of Science and the American Academy of Arts and Sciences. She is a member of the National Academy of Sciences, and the Genetics Society of America, as well as a former President of the Society for Developmental Biology (1998-1999) In 2012, GSA honored her with its award for lifetime achievement in genetics –  the Thomas Hunt Morgan Medal – and in 2014 the Federation of American Societies for Experimental Biology recognized her with its Excellence in Science Award.