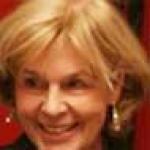 Patricia Murphy Gruber is Co-founder and President Emeritus of The Gruber Foundation.  Before gifting the International Prize Program to Yale in 2011, she oversaw all of its operations. In a little over a decade, The  Gruber Foundation has grown from its beginnings in what she calls “predictable philanthropy” to the present focused programming. She clarified and expanded its focus.

With a background in liberal arts, she holds an M.A. in Psychology from Antioch West University, and a 2-year Post Masters Certificate in Psychology from the Psychotherapy Institute in Berkeley. Previously a psychotherapist in private practice in California, she devoted herself full time to the Foundation until recently. She is a Gruber Member of the Board of Directors, with a lifetime appointment.

Mrs. Gruber also supports her beliefs by serving on a number of boards, the Board of the Forum in the US Virgin Islands; American Committee for the Weizmann Institute of Science ; and also as founding member of the Milton Erickson Institute of the Bay Area. With her husband, Peter, she guided the Gruber Foundation from its inception in 1993, and was its full-time president from 2000 - 2011.