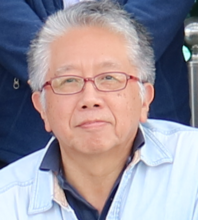 Paul Ho was born in Hong Kong, and immigrated to the United States at the age of 11.  He received his training at MIT, obtaining both his S.B. (1972) and Ph.D. (1977) degrees in physics.  He served as postdoctoral fellow at the Five College Radio Astronomy Observatory, and at the Radio Astronomy Laboratory at UC Berkeley.  He was then faculty member at Harvard University before becoming SMA Project Scientist and Senior Astrophysicist at the Smithsonian Astrophysical Observatory.   He has served as ASIAA Director during 10 of the last 14 years in Taiwan.  He is currently the Director General of the East Asian Observatory, a newly established joint observatory between China, Japan, Taiwan, and Korea   His scientific interests include molecular spectroscopy for resolving 3D dynamics , molecular outflows as the core process in star and planet formation, magnetic field via dust polarization morphology as the principal process in cloud collapse, supermassive black hole as the definitive probe of high gravitational fields, large surveys of galaxies as a window on early cosmological structures.  In his efforts to drive the growth of astronomy in Taiwan, Paul focuses on the development of instrumentation for forefront fields in astronomy.  These include the SMA, AMiBA, ALMA, GLT, TAOS, WIRCam, HSC, PFS, ERG, and SPICA.  Participation in these projects gained access for Taiwan to frontier research in astronomy, while building the infrastructures in Taiwan in terms of manpower, technology, and industrial partnership.  Paul has promoted the participation of Taiwan in the EACOA, which unites the East Asian Observatories to work on regional collaboration and development, in order to make Asia competitive with the western countries.  Paul has an H-index of 70. His most cited papers are on interstellar ammonia, the construction of the SMA, and the interacting M81 galaxy group as seen in HI.  Paul is an academician of the Academia Sinica, and a Fellow of The World Academy of Sciences.