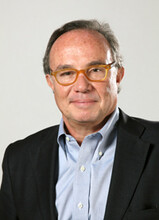 Pierre J. Magistretti, received his MD in 1979 from the University of Geneva and his PhD in Biology in 1982 from UCSD. He is a Distinguished Professor and Director of the KAUST Smart Health Institute. He was Dean of the Division of Biological and Environmental Sciences and Engineering at KAUST (Jan 2012-August 2020), Professor Emeritus at the Brain Mind Institute at EPFL and at the Department of Psychiatry at

UNIL/CHUV. Pierre J. Magistretti’s laboratory has discovered some of the cellular and molecular mechanisms that underlie the coupling between neuronal activity and energy consumption by revealing the key role that glial cells, in particular astrocytes, play in this physiological process. These findings are particularly relevant for understanding the origin of the signals detected by functional brain imaging, and are revealing a role of astrocytes in neuronal plasticity and neuroprotection. He is the author of over 240 publications in international peer-reviewed journals and has given over 70 invited lectures during the past five years. He has been elected at the International Chair 2007- 2008 of the Collège de France, Paris. He is member of Academia Europae and of the Swiss Academy of Medical Sciences. Among other recognitions, Pierre Magistretti has been awarded the Camillo Golgi Medal Award, the Emil Kraepelin Professorship, the Goethe Award of the Canadian Psychological Association and the Ott Prize of the Swiss Academy of Medical Sciences. He shared with David Attwell and Marcus Raichle the 2016 IPSEN Foundation Prize. Pierre Magistretti is an honorary member of the Chinese Association of Physiological Sciences. He is the Past-President of the Federation of European Neuroscience Societies (FENS) and Past‐Secretary General of the International Brain Research Organization (IBRO) and was President of IBRO from (2014-2019). He is on the Board of Trustees of HFSPO and a Fellow of the American College of Psychopharmacology. He is and has been member of several academic scientific advisory boards including the Research Council of the Swiss National Science Foundation. He is the Vice-Chairman of the European Dana Alliance for the Brain (EDAB) since 2002 and is member of the Dana Alliance for Brain Initiatives (DABI) and in this capacity he is strongly engaged in the public understanding of neuroscience.