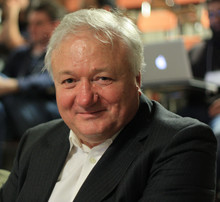 Professor Dr. Sunyaev is known for his work with Yakov Zel’dovich. In 1970, they predicted the existence of the baryon acoustic oscillations and acoustic peaks, later discovered in the CMB power spectrum. The Sunyaev-Zel’dovich effect causes a change in brightness of the CMB in the directions towards clusters of galaxies. Together with Nikolai Shakura, Rashid Sunyaev developed the ‘standard accretion disk’ theory. He was Head of the Department of High Energy Astrophysics at the Space Research Institute of the Russian Academy of Sciences when he developed the scientific programs for the Roentgen Observatory on the MIR space station and GRANAT Observatory and became the Institute’s Chief Scientist in 1992. He is currently a Director of the Max Planck Institute for Astrophysics in Garching bei München, Germany.

Rashid Sunyaev was born in Tashkent, Uzbekistan, in former Soviet Central Asia. He studied physics for six years at the Moscow Institute of Physics and Technology, and was a researcher at the Keldysh Institute of Applied Mathematics of the USSR Academy of Sciences. In 1968, he earned his Candidate of Sciences degree (equivalent to a doctorate), and in 1973, his Doctor of Sciences degree in astrophysics from Lomonosov Moscow University.