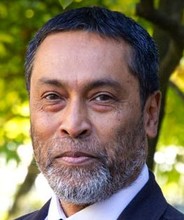 Subir Sarkar was born and educated in India, obtaining his PhD from the Tata Institute of Fundamental Research, Bombay in 1982. Since 1990 he has been at the University of Oxford where he is now Head of the Particle Theory Group at the Rudolf Peierls Centre for Theoretical Physics. He also holds a Niels Bohr Professorship at the University of Copenhagen where he is spending half his time during 2013-18.

His research is mainly at the interface between astrophysics/cosmology and fundamental physics, concerning cosmic rays, dark matter, nucleosynthesis, inflation & the formation of large-scale structure, neutrino cosmology etc. He also participates in astroparticle experiments: the IceCube Neutrino Observatory at the South Pole, and the forthcoming Cherenkov Telescope Array.

He serves on a number of advisory bodies including the Astroparticle Physics International Committee of the IUPAP and is a member of the Particle Data Group which compiles the Review of Particle Properties. He has been Coordinator of the EU Marie Curie Research & Training Network UniverseNet and of the Oxford-India Network in Theoretical Physical Sciences.