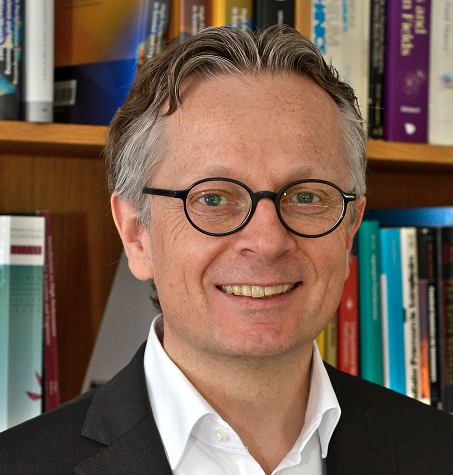 The universe as we know it today, from our own Milky Way galaxy to the remnant radiation of the Big Bang, is merely the universe that we can see: a moment in time, a snapshot of sorts. How the universe got that way—what happened before the click of the shutter; how it achieved its current structure—requires tremendous feats of theorizing. Since the 1980s, however, cosmologists have had another tool to study the formation of structures in the universe, one that allows them to test their theories and discover new mysteries to solve: computational simulations.

Lars Hernquist has been at the forefront of this field since the late 1980s, almost since its inception. In 2000, as a member of the astronomy faculty at Harvard, he met a postdoc, Volker Springel, who shared his enthusiasm for the study of large-scale structures in the universe, and who turned out to have a unique ability for powerful numerical algorithms. Their collaboration quickly revolutionized cosmology.

Computational simulations allow cosmologists to compare theoretical predictions of growth processes with actual observations of the universe. Hernquist and Springel realized that such simulations needed to include feedback—outflows (such as gas) that would be feeding back into the evolutionary processes they were trying to recreate. That innovation has transformed research, including their own, into the formation of structures at virtually every scale, from stars, supernovae, protoplanetary disks, supermassive black holes, galaxies and galaxy mergers, to the dark matter that determines the distribution of superclusters of galaxies into web-like tendrils.

Both Hernquist and Springel have themselves written codes that they have used to make their own discoveries and that have become standard tools in cosmological simulations. Hernquist’s TreeSPH, which he and collaborator Neal Katz wrote in the 1980s, led to Hernquist’s investigations into interactions between galaxies. Springel first introduced GADGET with two collaborators in 2001, and, working alone, significantly expanded it in 2005, and subsequently deployed it in the Millennium Simulation, a highly influential rendering of the distribution of dark matter throughout the universe. Springel later also wrote AREPO, which he and Hernquist (and a team of collaborators) used in the creation of Illustris, a 2014 simulation of the formation of the galaxy distribution across a broad area of the universe.

The number of citations of their papers reflects their influence throughout cosmology, both individually and collaboratively. Springel’s 2005 paper on the Millennium Simulation has been cited more than 3000 times—more than any other astronomy paper in the history of Nature. That journal also included a 2014 paper by Hernquist and Springel on a list of the most influential papers to have appeared in its pages in the past fifty years. Hernquist has published more than 500 peer-reviewed papers, with more than 70,000 citations, and Springel has published more than 400 peer-reviewed papers, with 63,000 citations. Together they have co-authored 144 papers with nearly 24,000 citations.